The Origin Of Maps

What are the pathways immediately around us that lead to information being transmitted into our eyes and ears? What effects do these structures have on us? What agency do we have in how we relate to them? 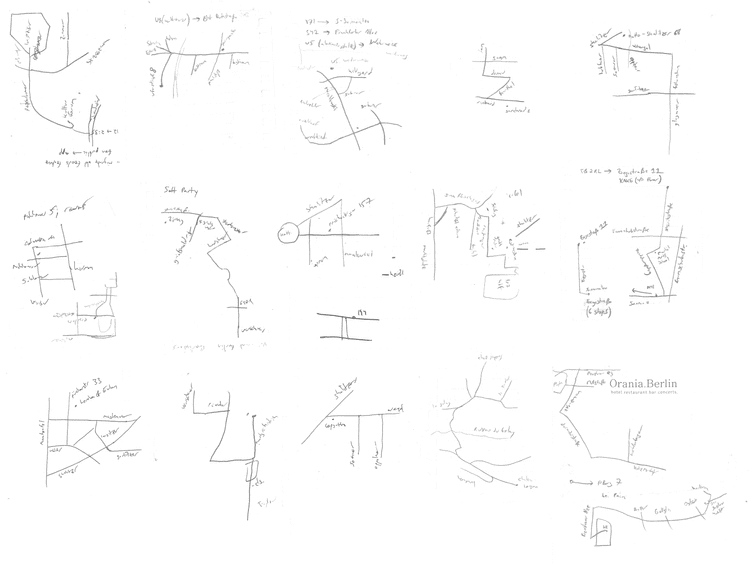 On November 18th of 2018 I decided that I would try to use a flip-phone for somewhere between three months and a year, along with keeping a journal of emotions that arose for me during the process, marking on a calendar any days where I used my smart phone, building a robotic machine which physically childblocks your smart phone, and creating a collection of all the maps I drew for navigating the city while using the flip-phone. 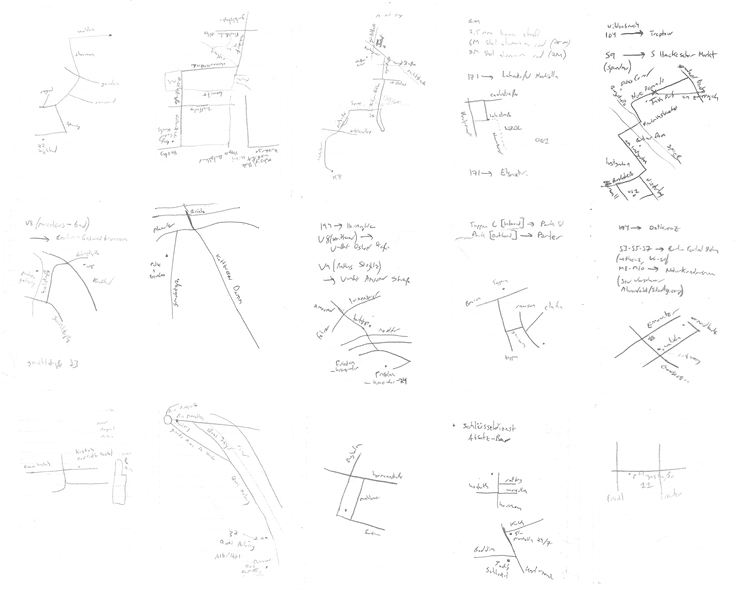 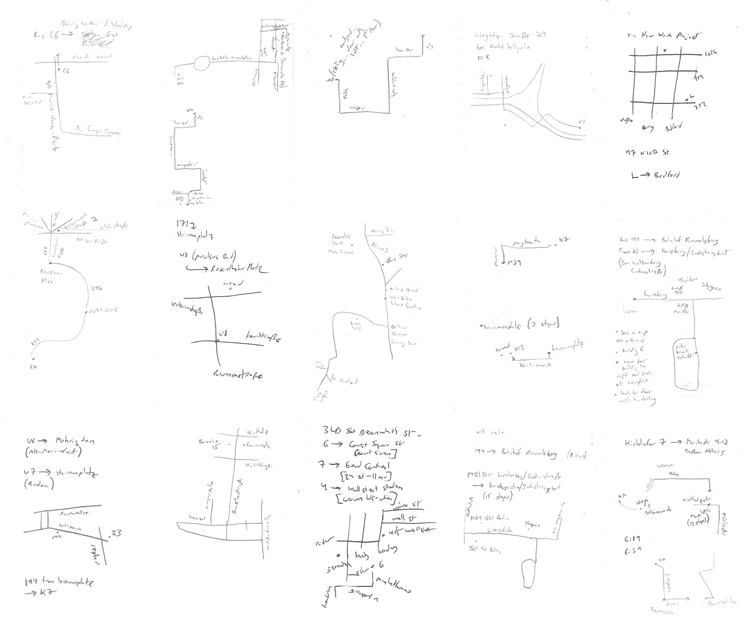 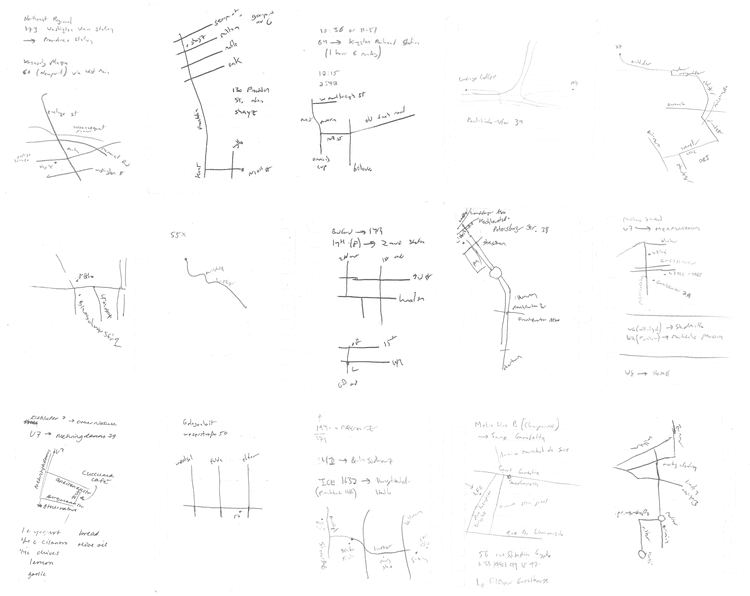 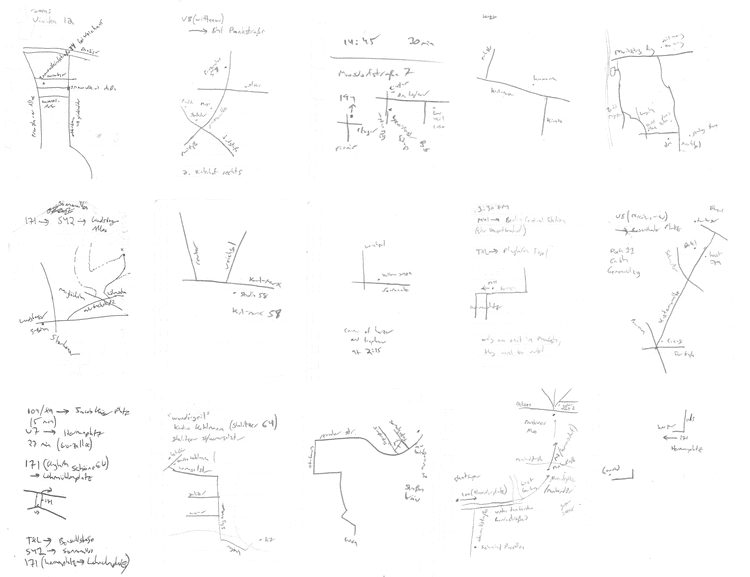 According to the journal, on December 14th, I imagined titling this collection of activities The Origin Of Maps, here is my note from that day:

12/14/18 (friday)
thought of the title The Origin Of Maps
a reference to direct experience, where all maps, originally, come from
by the time we see an address inputted into Google Maps,
there have been many layers of mediation
The Origin Of Maps invites a return to direct experience
using the flip phone, you have to think of who you want to text or call
like imagining a UI based on blank screen
the only ideas that surface are the ideas that originate from you

For me, using a flip-phone was an effort to call into question what is truly nourishing and not passively accept the status quo. I didn't want to do something speculative. Even if small, I wanted to make a concrete change to my life to prioritize direct experience and rest, a form of direct action. I considered it more as a ritual in tribute to mindfulness than an experiment with a single result. I think many people overestimate how often a smart phone is necessary, but it depends on what's happening in your life and I do not intend to make any universal claim.

I could tell that I exhibited certain compulsive negative habits with relationship to my smart phone, and from VR to AI I could see that the tech industry was full of overhyped narratives. I questioned in what ways this surveillance-funded gadget made from rare earth metals was truly serving me.

Here are my journal entries from the first 10 days after I decided to use a flip-phone:

day 1 (sunday)
picked up raspberry pi from kleinanzeigen and hung out with mylene
missed my turn on the way to kleinanzeigen pickup,
but used map in my bag to figure out where I had missed the turn
(felt like my rope harness catching me from falling)

day 3 (tuesday)
took my iphone with me to studio because I was feeling like texting from the corner of the studio was nice
was feeling unsure about the project,
and frustrated that people were having trouble understanding how I wanted to be reached
in the evening left studio without my smart phone
felt rejuvenated by patty texting me updates to where the birthday party she was at was,
even though we had been messaging before on telegram.
she understood the system I wanted to use and laughed and told me it wasn’t that complicated

day 6 (friday)
using flip phone feels like gently scuba-diving away from my computer everyday
messaging during the day, it was not so difficult making plans for the weekend

day 7 (saturday)
thought I had memorized directions, but realized I hadn’t memorized what to do after getting out of the u-bahn
successfully navigated the final part by asking strangers on the street for directions

day 9 (monday)
catherine lost her computer while on vacation and spent a week without computer or phone
she says she feels a bit feral, but in a good way. I feel like I can also feel a difference
she is dreaming of having no laptop,
just having her computer be in a physical location where it is used.
or of getting a job with her hands, becoming a cook

day 10 (tuesday)
enjoyed getting coffee with Isaac, and baking a sweet potato for myself in the evening.
not sure if this deserves to be in the journal or not, but it felt nice to buy a single sweet potato, and take it home and bake it and eat half of it for dinner (with rice and beans) and then eat the other half for breakfast the next day with eggs

I also made a physical zine with Catherine Schmidt about disconnection practices as healing practices. If you would like to read it, you can order a copy here:

I wrote a bit about ups and downs I went through of wanting to “end the project” and go back to using my smart phone at different points, and how ultimately I “gave up” in May but then two days later I went back to using my dumb phone by choice and I didn’t feel as agitated anymore when it was now no longer part of an experiment but just something I was doing and could stop whenever I wanted. I then continued to use the dumb phone for the rest of the year until November 29 of 2019, except for a period when I was in the US without a working sim card. I particularly look back highly on the first three months where I felt a lot of excitement and newness. I am currently using my smart phone again and I may take more time away in the future. I especially dream of being in more situations where I am so engaged with my surroundings that my smart phone ends up staying in my bag out of batteries for days without me noticing. Disconnection practices can be a tool to help us reconnect with our senses and find rest in the interim.